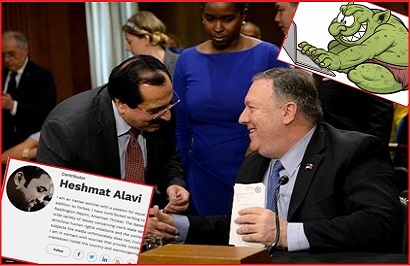 Negar Mortazavi and Borzou Daragahi , Independent, June 11 2019:…The “Heshmat Alavi” persona had a strong presence on Twitter and harassed Iranian journalists, academics, and activists who are critical of the Mujahedin-e-Khalq organisation, a one-time armed guerilla group now holed up in Albania. There is no known link between the Iran Disinfo programme and the fake persona. At least one was cited by the Trump administration as proof against the effectiveness of the Obama-era nuclear deal. Some of the MEK articles were also picked up by US government funded Voice of America’s Persian-language service. Heshmat Alavi Gate

‘This is something that happens in authoritarian regimes, not democracies’

United States officials say they are outraged by a government-funded troll campaign that has targeted American citizens critical of the administration’s hardline Iran policy and accused critics of being loyal to the Tehran regime.

State Department officials admitted to Congressional staff in a closed-door meeting on Monday that a project they had funded to counter Iranian propaganda had gone off the rails. Critics in Washington have gone further, saying that the programme resembled the type of troll farms used by autocratic regimes abroad.

“It’s completely unacceptable that American taxpayer dollars supported a project that attacked Americans and others who are critical of the Trump administration’s policy of escalation and conflict with Iran,” a senior Congressional aide told The Independent, on condition of anonymity.

“This is something that happens in authoritarian regimes, not democracies.”

One woman behind the harassment campaign, a longtime Iranian-American activist, has received hundreds of thousands of dollars from the State Department over the years to promote “freedom of expression and free access to information.”

The campaign relentlessly attacked critics of the Iran policy on social media, including Twitter and Telegram messaging app, accusing them without evidence of being paid operatives of the regime in Tehran.

A spokeswoman for the State Department told reporters on Monday that funding for the “Iran Disinformation Project” had been suspended and is under review after it was reported that it went beyond the scope of its mandate by veering from countering propaganda from Iran to smearing domestic critics of White House policy.

State Department officials disclosed to lawmakers they had granted $1.5 for Iran Disinfo, which repeatedly targeted, harassed and smeared critics of Trump’s tough stance against Iran on social media.

Among those targeted were American activists, scholars, and journalists who challenged the Trump administration’s “maximum pressure campaign” against Iran.

The revelation that US taxpayer money was being used to attack administration critics has now sparked a flurry of queries.

“There are still so many unanswered questions here,” Congresswoman Ilhan Omar wrote on Twitter. “What rules are in place to prevent state-funded organisation from smearing American citizens? If there wasn’t public outcry, would the Administration have suspended funding for Iran Disinfo?”

Cold War-era US rules barring the use of government-funded propaganda against American citizens have been flouted for decades.

She added: “This is unacceptable and we will not stand for it.”

State Department officials speaking at the closed-door meeting admitted the project was out of bounds, according to Congressional staffers speaking to The Independent on condition of anonymity.

Both Democratic and Republican Congressional staffers were highly critical of the project and questioned whether US officials should continue to work with the contractor, E-Collaborative for Civic Education. The State Department spokeswoman declined to outline steps to prevent such an operation in the future.

Some have said the harassment campaign resembles those launched by the Iranian regime against its critics, as well as clandestine troll farms run by Russia, Saudi Arabia, and other autocracies in attempts to shape online debate and intimidate critics.

In a twist, Iran Disinfo has even attacked journalists deemed insufficiently supportive of the Trump administration’s policies at US-funded news outlets including Voice of America, Radio Farda, and RFE/RL.

The harassment campaign is one aspect of an Iran policy that critics have warned was overly politicised, incoherent and risky.

Defying American allies, the United Nations Security Council, and the advice of his own intelligence mandarins, Mr Trump voided the 2015 Iran nuclear deal last year and launched an unprecedented campaign of sanctions and threats against Tehran, vowing to pressure the country into cutting a “better deal” than the one it forged with his predecessor, Barack Obama.

Seeking evidence that its policies were working and popular, the administration has relied an unconventional information sources, often citing obscure right-wing news outlets and think tanks.

It purports to promote democratic political life and empower civil society inside Iran, but it appears to have no presence inside the country and instead confines itself to engaging with Iranians in the Diaspora.

Congressional officials also confirmed to The Independent that one individual working for the Foundation for Defence of Democracies, an influential Washington organisation with hawkish views on Iran, is part of the E-Collaborative for Civic Education’s Iran Disinformation Project.

One Congressional staffer said he expected the State Department would examine “the extent of coordination” between Iran Disinfo project and “pro-war think tanks like the Foundation for Defence of Democracies.”

Over the weekend, The Intercept revealed that a purported Iranian activist, who had published dozens of articles on Iran in prominent outlets such as Forbes and The Hill, does not exist and is a fake persona run by a team of operatives connected to a bizarre Iranian political cult.

The “Heshmat Alavi” persona had a strong presence on Twitter and harassed Iranian journalists, academics, and activists who are critical of the Mujahedin-e-Khalq organisation, a one-time armed guerilla group now holed up in Albania. There is no known link between the Iran Disinfo programme and the fake persona.

At least one was cited by the Trump administration as proof against the effectiveness of the Obama-era nuclear deal. Some of the MEK articles were also picked up by US government funded Voice of America’s Persian-language service.

Both the Alavi account and the US-funded account frequently accused Iranian Americans sceptical about the Trump administration of being dupes of the Tehran regime.

“It’s an outrage that the Trump Administration was funnelling taxpayer dollars to a smear campaign accusing US citizens of dual loyalty to a foreign regime,” Dylan Williams, vice president of the left-leaning Jewish-American organisation J Street, told The Independent.

“Decent people wouldn’t tolerate such state-sponsored defamation if the target was Jewish Americans and we shouldn’t when the target is Iranian-Americans.”

Remember: MEK was an American excuse to invade Iraq