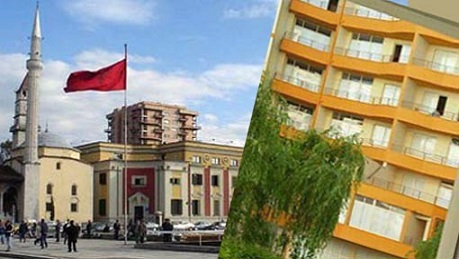 The Iranian MEK in Albania: Implications and Possible Future Sectarian Divisions (aka Mojahedin Khalq, Rajavi
Ebi Spahiu, Balkanalysis, March 02 2017:… Whether Albania is prepared enough to inherit a long-standing struggle between a major regional Middle Eastern power and a cult-like former terrorist organization is yet to be seen, but given Albania’s continued struggles with endemic corruption and organized crime, and the slow emergence of religious radicalization as a regional security threat, sectarian …

Balkanalysis.com editor’s note: in 2013, the Obama Administration convinced Albanian authorities to take in the MEK, a former Marxist terrorist group that had been in open combat with the Islamic Republic for years. In 2016, under cover of the migration crisis and with help from the UNHCR, several hundred more of these Iranian dissidents were brought into Albania from Iraq. What could possibly go wrong? In this exclusive new analysis of a little-discussed security subject, Albanian counter-terrorism expert Ebi Spahiu analyzes the potential for future sectarian divisions and domestic and international orientations towards Albania’s newest population.

In 2013, the Obama Administration struck a deal with the government of Albania to offer asylum to about 250 members of Mohajedeen-e-Khalq (MEK), an Iranian “dissident group” exiled from Iran to Iraq during the early years of Khomeini’s regime. The group was once labeled a terrorist organization by the international community due to its track record of orchestrating bombing campaigns in Iran – often targeting American offices, businesses and citizens – as well as other military operations in an attempt to oust the newly established Iranian Islamic regime in the 1970s.

Since 2013, the Obama Administration and Albanian government have extended the agreement, consequently increasing the number of asylum seekers to somewhere in the range of 500-2,000 MEK members. During the summer of 2016, Tirana received the largest contingent of about 1,900 people- an operation managed by the UNHCR.

Although most local media portray the operation and Albania’s willingness to offer assistance to the dissident group as a humanitarian mission, little discussion has been made regarding the potential implications that MEK’s presence may have for Albania in the long run, and for religious balances that have already been thrown off by Wahabbi and Salafi presence among moderate Muslim communities in recent years.

Sunni-based Islamist supporters and organizations have a history of operating in Albania and throughout the Western Balkans via funding that often streams from Gulf countries which have exported Wahabbi and Salafi Islamic values and traditions, ones that were previously foreign to Albania’s majority Muslim population which still follows the Hanafi-based teachings inherited by the Ottoman Empire.

According to a Pew Research Center analysis on Albania’s Muslim population, this religious composition is reflective of centuries of religious influences, including Sufi and Shi’a traditions, attested in practices and rituals to this day. It is mainly from this long history that six in ten Muslims do not distinguish their religious affiliation in a sectarian form, such as Shi’a or Sunni, rather simply identify as “just Muslim,” according to findings by Pew.

Despite these historical legacies that have strengthened relations between religious communities, the presence of Wahhabi and Salafi groups over the years has implanted a sectarian identity regarding which most Albanian Muslim practitioners were oblivious in the past. Since the outset of the conflict in Syria, about 150 Albanian citizens and over 500 ethnic Albanians from Kosovo and Macedonia have joined terrorist organizations in Syria and Iraq, alongside then-Jabhat Al-Nusra and later IS.

Even though the number of foreign fighters has drastically decreased since 2015, threats persist from non-violent agitations and divisive narratives that continue to dominate some religious landscapes, including negative portrayal of local Bektashi communities and sectarian rifts which are becoming more pronounced among popular religious leaders.

The MEK in Albania and Sectarian Divides

Since its inception in the 1960s, the MEK has embraced Marxist ideologies and Shiite-centric Islamic values; this has distinguished the group from other Islamist terrorist organizations which have remained more focused on their sectarian identity.

Most people in Albania know little about the MEK, nor the list of other namesthe group has used to identify itself as a resistance group against Khomeini’s theocratic rule, not to mention their activities following the Iranian revolution and their exile to Iraq, where Saddam Hussein offered his support in exchange for their capacities to threaten the Iranian regime.

Over the years, the MEK has renounced all violence and developed closer relationships with officials from the American government, which later removed the group from its official list of terrorist organizations. Despite their engagement with the West, however, the group’s history of violence remains an important question often raised by Iran observers and policy-makers, who cast doubt on the group’s pledge to have renounced all forms of violence while achieving political objectives.

In 2013 this was apparent when many countries that were approached by the US government to host MEK members refused to do so, out of concern for security implications. Romania is believed to have been the US’ preferred host for the MEK, but the Romanian authorities immediately refused. Albania was therefore not the first choice for MEK relocation, but accepted due to its close relations with the US.

The type of security implications their presence may bring is yet to be assessed by Albanian policy-makers, with some speculating that the MEK will establish a base in the country’s capital, similar to that of Camp Liberty and Ashraf in Iraq, where they can access weapons and restart their political activities to bring down Iran’s regime.

Even though most MEK asylum-seekers seem to lead a quiet life in their new homes, recent events and discussion regarding the potential death of the exiled MEK leader, Massoud Rajavi, suggest that the MEK seeks to regain its political standing in opposition to Iran, and sees its members’ relocation to Albania as an opportunity to reengage as a resistance movement against Khameini’s regime, but this time away from the direct threat that Iranian proxy groups posed for them in Iraq.

The Paris Event, Albania and Possible Foreign Interests in the New Arrangement

Since their arrival in Albania, the group appears to have ramped up support in the midst of Albania’s political elite, which was highly celebrated during a congress organized by the National Council of Resistance of Iran, held in Paris this past July.

Pandeli Majko, a current Socialist MP and former Prime Minister of Albania during the war in Kosovo, accompanied by over 20 political representatives from Albania, gave an impassionedspeech at the Free Iran gathering in Paris where he pledged his support for the refugees currently staying in Albania, as well as the group’s struggle to succeed in changing the regime in Iran. This has certainly angered Iranian officials who insist that the MEK seeks to exploit Albania’s geographical position in order to form a new camp there.

While Iran’s traditional rivalry with Israel might seem to indicate further activity in Albania involving the MEK, available information does not suggest any significant Israeli activity. However, a potential greater concern involves another traditional Iranian adversary – Saudi Arabia – which has been reported as giving help to the MEK. During the event in Paris, several important international figures attended and (as was reported in some anti-Western media) a Saudi government representative made a speech that pledged commitment to help out the movement in bringing down Iran’s regime.

These developments may have serious repercussions for Albania and Albanian policy-makers who may not foresee the long-term consequences of being involved in the issue, and in expanding their role on foreign policy issues beyond the small Balkan nation’s traditional reach.

Since the MEK has renounced all violence, the group does not represent an immediate threat to national security in Albania. However, it does remain an existential threat to the Iranian regime, which over the years has supported significant raids via Hezbollah and other Iranian-backed proxy groups in Iraq to destroy the organization and kill key MEK leaders. It should be remembered that the MEK was brought to Albania under agreement with the Obama Administration directly from Iraq, not from any third country.

Considering these factors, more involvement should be expected from Albanian authorities, even though there are no clear signs that Iran’s presence is increasing. It would be significantly harder for Iran to hit MEK in Albania than in its neighboring country of Iraq, though it is still possible.

Of more concern is that the MEK presence poses a risk of inflaming sectarian divides in smaller communities, a phenomenon still in its latent state among Albanian Muslims.

Several online sermons from Sunni-based religious leaders warn their followers of a Shiite presence under NGO programs that aim at recruiting young men and women to follow Quranic teachings and study programs in Iran, but there is never a mention of MEK’s presence in Albania and the role they may play.

While a serious sectarian war is farfetched at this point, there is a sectarian narrative to the issue which could be a matter of concern for the future, depending on how strong existing Islamist factions become. These include not just ISIS supporters, but also Turkish and Muslim Brotherhood supporters.

One test will be how well the government manages the MEK, their needs and political objectives. Many Albanians are worried about whether the MEK poses any immediate risk, but nobody is actually talking about Iran’s historic and cross-borders feud with the MEK, and how threatened Iran still feels by the group.

Whether Albania is prepared enough to inherit a long-standing struggle between a major regional Middle Eastern power and a cult-like former terrorist organization is yet to be seen, but given Albania’s continued struggles with endemic corruption and organized crime, and the slow emergence of religious radicalization as a regional security threat, sectarian rifts may add to the list of challenges facing Albania’s political standing. One point of controversy that has already occurred domestically is that the agreement itself is very vague; there has thus been plenty of criticism domestically over a perceived lack of transparency on the terms agreed between Albania and the US.